It’s kind of funny how the invention of one thing results in the invention of something else. For hundreds of years Mediterranean and Eastern cultures have served pureed fruit drinks that resemble what we call smoothies. It wasn’t until the invention of the blender and home refrigerators in the 1900’s that thousands of Americans began experiencing the joy of blended juices the rest of the world and adventurous travelers had known for some time.

Refrigeration became available for the home in 1915, even though commercial restaurants had refrigeration for a decade before that. The leakage of certain gases (like ammonia) used in commercial appliances made refrigerators generally unsafe for home use. It wasn’t until the 1930’s that refrigerators became safe, gained in popularity and dropped in price. The timing couldn’t have been better.

As Americans were discovering the joy of frozen food, fruit and fresh milk in their kitchen, Stephen Poplawski was inventing another popular kitchen appliance – the blender, originally intended to be used as a mixer.

Kitchen appliances and cooks had long been chopping, mincing and dicing, but Poplawski’s blender was the first appliance to put a spinning blade at the bottom of a container to do so, making it easier to make milkshakes and soda fountain style drinks at home and in drugstores. In 1935 Fred Osius improved on Poplawski’s idea and invented the now famous Waring Blender. When Osius told a reporter the mixer would “revolutionize American drinks”, he had no idea how true his prediction would be!

Prior to refrigeration in the home, the flavors of most smoothies were limited to the fruit that was in season. This meant flavors like bananas, pineapple and strawberries were the most popular and available flavors, and still are. Blueberries, raspberries, cranberries, pomegranates and other more exotic fruit flavors came later, when the fruit could be frozen and stored for use during the off-season.

With the invention and use of both blenders and refrigerators, the smoothie began to gain in popularity during the 30’s, 40’s and 50’s. However, what really boosted the smoothie’s popularity was the growth of the macrobiotic and health food movement of the 60’s. According to Dan Titus, the director of the Juice and Smoothie Association, health-food stores began to sell fruit juices and fresh fruit drinks to meet the demand and interest more and more people had in macrobiotic diets and their health.

It wasn’t just health nuts and hippies who were interested in building better bodies in the 60’s and 70’s. A young and wildly popular bodybuilder named Arnold Schwarzenegger use to drink a pitcher of beer after his intense workouts. Another well-known bodybuilder at the time, and twice Schwarzenegger’s age by the way, was named Jack Lalanne. Lalanne was one of the earliest juicing and nutrition advocates – and more importantly, one with a television show where he touted the benefits of healthy eating and juicing and was the first person in the US to sell nutritional supplements on television.

Lalanne opened the first health and fitness club that promoted healthy eating and juicing in 1936 – helping to spread the word about nutrition, juicing and smoothies to body-builders and weight lifters as well as the public who followed his popular television show about health, nutrition and weight training. Lalanne was the first person to open a combination health-food store and gym, the first to come up with a weight loss breakfast meal replacement drink and to advocate weight training and nutrition. Later in life he even put his name on his own juicer – the Jack Lalanne Power Juicer. Some of his recipes are still among the most popular on the Internet today.

How Smoothies got their name

History credits the hippies of the 60’s with a lot of things, but naming drinks isn’t usually one of them. The fact is, along with peace, love, flowers and freedom hippies also gave the smoothie its name.

By 1970 a lactose intolerant teenager named Steven Kuhnau began to make smoothies in order to be able to enjoy something similar to the milkshakes most of his peers loved. Unable to digest milkshakes because of his lactose intolerance, he created frozen blends of fresh fruit, ice, and nutrients and fruit juice instead. He was excited to discover that not only did they taste good; they helped control his allergies and blood sugar levels as well. Kuhnau was so excited by his invention he opened a health food store called “The Smoothie King”, and began selling vitamins alongside his healthy drinks.

Kuhnau didn’t invent the name. He just branded it, saying the first time he heard the word was in reference to fruit and fruit juice based drinks made by “hippies” in the late 60’s. Prior to Kuhnau’s “Smoothie King”, the name “smoothie was used to describe everything from women’s bras and girdles, to ball point pens, car paint and machinery. There was even a band named “The Smoothies”! It wasn’t until Kuhnau opened his health food store and called his drinks “smoothies”, to appeal to the already health conscious hippies who knew what the term meant, that the name took off. Now, with more than 600 “Smoothie King” stores nationwide today, it’s unlikely the name will ever change.

When was the first smoothie made? 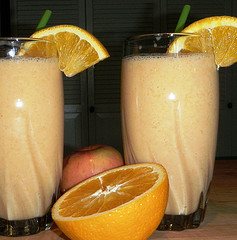 Smoothies aren’t an American invention. They go back centuries to cultures around the world, and then to South America as a “fruit slush”. But it’s safe to say that the American smoothies, a pureed fruit drink, began in the early 1920’s when Julius Freed, another young man with a sensitive stomach, began looking for a way to enjoy fresh squeezed orange juice. His stomach couldn’t handle the acidity of fresh squeezed oranges, so he found a way and a few choice ingredients to make them less acidic and a little frothy. His friends loved them and said, “Give me an orange, Julius”, and thus his store, the “Orange Julius” was born.

Seizing on the idea and the concept of pureed fruit juices from Brazil and other countries, different people created different recipes. The invention of the blender and the refrigerator simply made the drink more popular and more accessible to more people.

The Evolution of Smoothies

Smoothies have come a long way over the years. There are hundreds of recipes available to choose from today, on both ends of the health spectrum, containing a multitude of different ingredients. For truly healthy smoothie recipes just poke around my site and try what looks good to you.

For many people, including myself, smoothies are a vehicle for transforming and improving your health. Jump on board and enjoy the ride!

As always, comments are both welcomed and encouraged. Cheers!

21 Responses to The History of Smoothies: What Every Serious Smoothie Maker Should Know