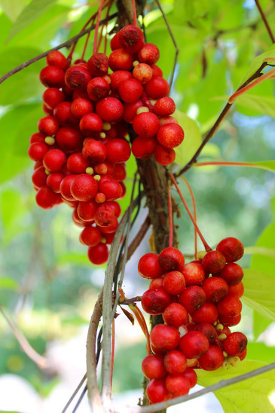 There is an exciting new supplement on the market that you need to know about. It isn’t really new, as the Chinese and other eastern nations have been aware of it for thousands of years, but in the west the benefits of this remarkable plant are just coming to light.

Officially called Schisandra chinensis, the plant is more commonly referred to as schizandra and when consumed regularly it may be able to improve vitality, slow the aging process, cleanse the liver, destroy stress, improve the condition of your skin, and benefit your health in a number of other ways.

Schizandra is a plant that is native to northern China and eastern and northern Russia. Its name translated from Chinese means the five flavor berry. The berries of schizandra earned this name because they are said to have the five flavors of salty, sour, sweet, bitter, and pungent or spicy. The plant is a vine that typically climbs around tree trunks and it produces small red berries, which are the edible and medicinal portion.

The people of China, Russia, Korea and Japan have long used schizandra for its medicinal benefits. In these countries the berries are used to make wine, tea, juice, sweets, and extracts. Traditionally these extracts and products containing schizandra have been used to treat a variety of conditions. They include respiratory illnesses, diarrhea, asthma, impotence, insomnia, and liver and kidney problems. It has also been used by athletes to improve endurance and to counteract fatigue.

In traditional Chinese medicine schizandra is one of the 50 fundamental herbs. It is considered particularly special among these medicinal herbs because of the five flavors which correspond to the five elements of water, wood, fire, earth, and metal. Schizandra is also believed to be aligned with all 12 meridians and to be able to access the three treasures of qi, jing and shen.

What are the Benefits of Schizandra?

Today, modern medicine and scientific research are struggling to catch up to what the Chinese, eastern Russians and Koreans have known for over a thousand years: that schizandra provides a number of health benefits to those who consume its berries regularly. You can take advantage of the miraculous effects of schizandra as it becomes more accessible in the west.

Schizandra is considered to be generally safe to take for most people. Research into the effects of schizandra on the body is limited in modern science, but it has been used for thousands of years by the people of eastern Asia. There are a few potential side effects including a skin rash, upset stomach, and heart burn, but most people never experience these.

There is a slim chance that schizandra can promote contraction of the uterus, which could potentially lead to a miscarriage. Pregnant women should not use schizandra for this reason. It is always a good idea to tell your doctor about any herbal supplements you take in case there are any interactions with medications that you have been prescribed.

Schizandra is most often used in its powdered form. You are not likely to find the fresh berries for sale. The powdered berry extract is made from ripe schizandra berries. The process locks in the nutritional benefits so that you get a powder that gives you concentrated schizandra. The amount you should use each day depends on the brand and how concentrated the powder is. A general guideline is to use between one quarter and one teaspoon daily. Start out small and work your way up to larger quantities to allow your digestive tract to get used to this new supplement.

You can use your schizandra powder in just about any smoothie recipe as a supplement for nutrition. If you find you don’t like the taste of the powdered berry, you should be able to find it in capsule form, or you can bury it in a smoothie with flavorful ingredients like cacao or coconut oil. If you want to embrace and enjoy the flavor of schizandra powder try combining it with ingredients that go well with other berries. Add a teaspoon to your favorite mixed berry smoothie recipe, for instance, or combine it with acai pulp, pomegranate juice, or goji berries. Schizandra also pairs well with citrus flavors like orange, lemon, and grapefruit. Here is a simple recipe to get you started.

Toss all of these ingredients into your blender and blend for about 30-45 seconds or until your desired consistency is achieved.

Another great way to consume schizandra is through this refreshing drink, which I like to have first thing in the morning when the weather is warm.

Combine the ingredients in a quart mason jar or similar container and shake vigorously.

However you decide to consume schizandra, make sure that you use this supplement every day. By using it regularly you will see the maximum benefits to your longevity, liver health, skin condition, immune system functioning, and to your overall health in general.

Where to buy Schizandra