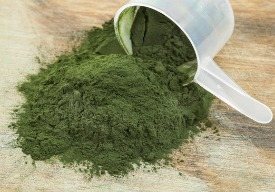 Spirulina is a superfood unlike any other. It is a type of blue-green algae, or cyanobacteria. Blue-green algae are an ancient type of life form. They are bacteria, but also sometimes classified as plants. This type of algae gets its energy from the sun, just like plants, and uses photosynthesis to convert sunlight into food. There are many different types of algae under the blue-green classification, some of which produce toxins that can kill people and animals, and a few that are very nutritious and have healing properties.

In the latter category is spirulina. Two species of cyanobacteria, Arthrospira platensis and Arthrospira maxima, are called spirulina. At one time, these two species were put in the genus Spirulina, and although they now belong in Arthrospira, the name stuck. Spirulina cyanobacteria grow in subtropical and tropical lakes that have high acidity and high levels of the minerals carbonate and bicarbonate.

The Aztecs of Mexico discovered centuries ago that spirulina growing in Lake Texcoco could be eaten and could provide a good source of nutrition. Spanish explorers recorded that the Aztecs harvested the cyanobacteria from the lake and formed it into cakes to be sold. The first modern production of spirulina on a large scale was at Lake Texcoco in the 1970s. Natives of Chad in Africa have also historically used spirulina as a food source, making it into cakes that could be used in broths. The algae grow in the ponds around Lake Chad.

In modern times, people have discovered the nutritional content of spirulina and its hidden healing benefits. You can find it most commonly as a supplement in tablet, powder, or flake form, but spirulina can also be eaten as a whole food. Commercial production of spirulina has increased greatly since the 1970s and the top producers include the U.S., Thailand, China, India, Pakistan, Greece, and Chile.

The Health Benefits of Spirulina

Spirulina has many health benefits including high levels of protein, healthful fatty acids, and several vitamins and minerals like the B complex, vitamin K, vitamin E, beta carotene, zinc, copper, iron, manganese, and selenium. Additionally, research is beginning to show that spirulina has several healing properties. It seems to have a positive effect on immunity, allergies, certain viral infections, liver damage, and more. In its powder form, spirulina could be a potent and powerful addition to your next smoothie.

Protein: Spirulina is an excellent addition to your next smoothie if you need more protein in your diet. Spirulina is 62 percent protein and it contains all of the essential amino acids, or building blocks of protein. Not many non-animal sources provide so much protein, so this is a great food for vegetarians and vegans.

Allergies: Studies have been conducted to determine the effect of spirulina on allergic reactions. The results suggest that it can improve symptoms associated with allergies because it blocks histamine release in the body. Histamine is the substance that triggers allergy symptoms like watery eyes, congestion, and hives. Unlike over-the-counter and prescription antihistamine medications, spirulina will not suppress your immune system.

Immunity: Not only does spirulina not suppress your immune system, evidence from research indicates that it actually boosts your immunity. It seems to increase the production of antibodies, which fight infection, and cells that make up the immune system. Although more research is needed to confirm how this can benefit people, preliminary studies show that spirulina may have help fight off infections, cancer, and improve symptoms from chronic autoimmune diseases like Chrohn’s disease, fibromyalgia, lupus, and chronic fatigue syndrome.

Omega Fatty Acids: Spirulina contains high amounts of both omega-3 and omega-6 fatty acids, both of which are needed for a complete and healthy diet. When you consume adequate amounts of these fats, you lower your risk for heart disease, arthritis, diabetes, and even depression. They also help to reduce levels of bad cholesterol. In fact, small studies have shown that a daily dose of spirulina can lower both cholesterol and blood pressure, both of which are important for heart health.

Vitamin A: Spirulina is particularly high in vitamin A in the form of beta carotene. This vitamin is an important nutrient that is essential for the functioning of your eyes, for health skin, and for healthy mucous membranes and bones.

Oral Cancer: More research needs to be done to investigate the role of spirulina in fighting cancer, but in one specific study, it was shown to reduce the incidence of oral cancer among participants who used chewing tobacco. The participants had precancerous lesions in their mouths and took one gram of spirulina per day. They saw reduced lesions after one year.

Radiation Protection: Spirulina can protect the human body from harmful radiation and can even help it heal after exposure to radiation. Although how it does this is not fully understood, numerous studies have found that treating people who have been exposed to radioactive materials, removes radiation from the body and helps it to heal. Spirulina has been used with success to treat the victims of radiation disasters, including the people of Chernobyl.

Heavy Metals: Spirulina, like other types of blue-green algae, is very good at absorbing heavy metals. This means it can be used to remove lead and arsenic from contaminated water. It has also been given to people who drank contaminated water with successful results. Spirulina can absorb and remove these metals from the body.

What is the difference between spirulina and chlorella? Chlorella is often confused with spirulina because it is a type of green algae that can be used as a supplement. In evolutionary terms, chlorella is younger than spirulina. It has a harder cell wall and is closer to being a plant than spirulina. Chlorella, like spirulina, is high in protein and has some vitamins and minerals, but it lacks the healthful fatty acids of spirulina. On the other hand, chlorella is better at absorbing heavy metals.

How much spirulina should I eat each day? A typical recommended dose of spirulina for an adult is 500 milligrams. Follow the dosing instructions on the supplement container that you buy and do not take more than is suggested. For children, consult with a doctor before giving spirulina. It is considered safe, but research in kids is limited.

Are there any safety concerns associated with taking spirulina? Spirulina is very safe and produces no documented side effects when taken as a dietary supplement. It may interact with certain medications, though, including those that are used to suppress the immune system. If you think you might be on this type of medication, speak with your doctor before using spirulina. Although it is possible that spirulina may help people with autoimmune disorders, you should speak with your doctor before using it as a treatment for one of these diseases. If you have phenylketonuria, you should avoid spirulina. In rare cases, spirulina may be contaminated with toxic metals. This occurs when it is grown in an uncontrolled environment and it absorbs metals. You can avoid this possibility by purchasing spirulina from a reputable and organic source. Finally, avoid spirulina if you have an allergy to iodine.

Is there an issue with the vitamin B12 found in spirulina? There has been some controversy surrounding claims by spirulina manufacturers that it is a good source of vitamin B12. Spirulina is high in this vitamin, but research has shown that much of it is in a form that cannot be used by the human body. While spirulina is high in B12, whether it is useful B12 is still up for debate. For this reason, it is not recommended that you rely on spirulina as your primary source of this vitamin.

Spirulina is a great superfood ingredient for smoothies because you can buy it in powdered form and add it to nearly any recipe. The taste of the powder varies by brand, so try different types until you find one you like. I prefer Spirulina Manna, which you can find at Live Superfoods. The flavor can be a little overpowering at first, so ease into it. The beautiful thing about smoothies is that you can mask it with strong, tasty flavors. Here are some recipes to try that should taste delicious.

Place the ingredients into your high-speed blender and blend for around 30-45 seconds or until nice and smooth.

Embrace the nutrition of green ingredients in this smoothie. The tartness of the apple should help to mask the flavor of the spirulina.

For all of my smoothies featuring this wonderful green superfood – spirulina smoothie recipes.

I’d love to hear about your experience with spirulina – please do tell in the comments below.

Where to Buy Spirulina

Your local health food store should carry spirulina. If you want to purchase it online, I recommend Mountain Rose Herbs and Live Superfoods.