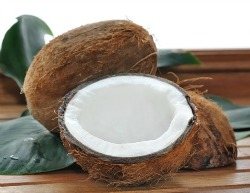 One of the tastiest of all superfoods is the delightful coconut. Whether you eat the meat of the fruit, drink the water or milk, or use the oil, you can get some serious health benefits and even improve your appearance with this tropical food.

One of the striking and unusual features of the coconut compared to other fruits is the amount of water it contains. This water has provided important hydration for people for thousands of years. In addition to the water in the young fruits, people have always eaten the meat, or the white part of the fruit. The milk, which is the juice made from the meat has also been consumed.

One of the most important and most commonly used byproducts of the coconut today is the oil. It is used extensively both internally and externally, and perhaps most commonly consumed for weight loss and increased energy. Coconut oil is comprised primarily of medium-chain fats, which the body uses for energy as opposed to storing as fat.

Coconut oil is one of the ultra-healthy fats you don’t want to avoid.

Coconut meat, water, and oil all provide significant health benefits. The oil, in particular, is lately gaining new acceptance as a superfood. For many years, health professionals advised against consuming too much coconut oil because of its high amount of saturated fats. Many organizations continue to dissuade the public from using it often, including the Food and Drug Administration, the World Health Organization, and the American Heart Association. According to recent research, however, these health professionals need to get on board with this food, which is being proven to be a smart choice for daily consumption.

Here is why you should start adding coconut, and especially coconut oil, to your diet and smoothies:

Weight loss: A study that gave dieting women either soybean oil or coconut oil every day, found that those consuming the coconut oil saw a reduction in the circumference of their waists, while those eating soybean oil did not. Both groups of women consumed the same foods and took the same type of exercise during the study. A well-documented metabolic stimulator, consuming coconut oil is one of the easiest ways to increase your metabolism.

Antimicrobial effects: Studies have also shown that coconut oil can act as an antimicrobial agent, killing fungus and bacteria. It has been shown to kill fungus that has become resistant to synthetic drugs. Additional research has found that coconut oil can kill the bacteria causes tooth decay. Even after you have ingested coconut oil, it maintains the ability to stop the growth of bacteria, which producing acid causes your teeth to decay.

Acne: The antimicrobial effect of coconut oil means that it can also help you prevent and heal acne. The compound in the oil thought to produce this effect, lauric acid, survives digestion intact and enters the bloodstream. From there, it is attracted to the oil glands in your skin and helps to reduce bacteria there. The bacteria in your oil glands are what causes outbreaks of acne.

Damaged hair: Coconut oil is not just for your physical well-being, it can improve your looks too. Protein loss from hair causes it to become weakened and then damaged. The result is frayed, frizzy, and dry hair. In a study that compared the application of mineral oil, sunflower oil, and coconut oil to hair, the latter came out on top. Coconut oil reduced protein loss in both damaged hair and hair that was still healthy, most likely because it is better able to penetrate individual shafts of hair than the other oils.

Hydration: Coconut water has become very trendy lately, and for a good reason. The water of the coconut fruit is packed with natural electrolytes that your body needs, especially when you have been active. Sports drinks are designed to rehydrate you by giving you water and electrolytes, but they also contain high fructose corn syrup or other sugars. Coconut water is all-natural and contains only the sugars that were in the fruit to begin with.

Alzheimer’s disease: One of the most exciting new areas of coconut oil research is in the treatment of Alzheimer’s disease. This devastating illness that afflicts some people as they age has resisted traditional medical treatment. A doctor in Florida, however, has recognized that one promising drug for treating the disease was nothing other than medium-chain triglycerides, a type of fat, from coconut oil. She treated her own husband, who was suffering from Alzheimer’s, with coconut oil. It slowed the procession of the disease and even reversed some of the symptoms.

Pneumonia: A study conducted by physicians found that children with pneumonia who were given coconut oil as well as antibiotic treatment recovered more quickly than those who received antibiotics alone. The oil seemed to help clear up breathing, reduce fevers, and improve blood oxygenation.

Energy: Most fatty foods contain fats that are made up of long chains of carbon. The fats in coconut oil are medium-chain fatty acids or MCFAs. Because they are shorter they do not need to be digested by the liver and gall bladder. When you consume coconut oil, then, you get a much faster source of energy than compared to other fatty foods. People who have had the gall bladder removed often have a fat-restricted diet, but can consume foods with MCFAs.

Other benefits: In addition to the above reasons to use coconut oil, it may also protect against cancer, provide the body with antioxidants to fight degenerative diseases, help regulate hormones, relieve the symptoms of chronic fatigue, strengthen the liver, regulate thyroid function, and boost your immunity.

Coconut Oil for Health and Beauty

We couldn’t publish this without adding even more information about coconut oil. There are numerous uses, and we’ll touch on a few before providing further evidence of its awesomeness.

Coconut oil is perfect for cooking because of how stable it is and can be used topically in a number of ways, including as a lotion, deodorant, eye-makeup remover, hair gel, and to deal with any sort of skin issue. We personally use a mixture of 3 parts coconut oil to 1 part cacao butter as a hair gel, shaving cream, and lotion.

If you’re still not convinced of the awesomeness of coconut oil, I leave you with this video by Dr. Mercola:

Is it important to buy virgin coconut oil? Yes. Virgin, or extra virgin, coconut oil has been produced by pressing coconut meat to extract the oil or by separating oil from coconut milk. This results in pure coconut oil, free from any contaminants. Oil that is not labeled virgin has been produced by drying coconut meat, extracting the oil, and then purifying it to remove unwanted substances. This process uses toxic chemicals and destroys the beneficial properties of the oil.

How can coconut oil be healthful when it contains so much fat? The saturated fats in coconut oil are medium-chain fatty acids. The medium chains are much easier to digest, almost exclusively burned for energy, and actually have a beneficial effect on cholesterol in the body.

What is the difference between coconut water and milk? The water is found inside the coconut fruit when you crack it open. The younger fruits such as young Thia coconuts especially contain a lot of water. Coconut milk is produced by mixing or blending the flesh or meat of the fruit and the water. The water is low in calories and full of electrolytes, while the milk contains more nutrients and calories.

Coconut milk is a great substitute for regular milk in your smoothies. You will get an intense and creamy flavor without the lactose that is tough to digest for some people. Coconut water from young Thai coconuts is also a great liquid to use in your smoothies and full of electrolytes.

To get the health benefits of coconut oil, consider blending it into just about any smoothie you make. The mild flavor of the oil complements a variety of smoothie types. For instance, if you combine a cup of strawberries, a banana, one tablespoon of coconut oil, one tablespoon of honey, and a cup of liquid, such as water or coconut milk, you will have a delicious and nutritious smoothie that will leave you feeling satisfied for hours. That’s actually the recipe for one of my most popular smoothies: Strawberry and Coconut Oil Smoothie.

Why not make coconut the focus of your smoothie? Combine one cup of coconut milk or coconut water with a half of an avocado, a half cup of blueberries, fresh or frozen, a third of a cup of coconut meat (or flakes or shreds), one tablespoon of coconut oil, one tablespoon of honey and a half teaspoon of cinnamon in a blender for a creamy and delicious smoothie. Consider adding cacao powder to make it a chocolaty treat.

For all of my smoothies featuring the wonderful coconut products: Coconut Oil Smoothies, Coconut Milk Smoothies, and Coconut Smoothies.

Where to Buy Coconut Oil

Encapsulating everything coconut in one blog post is impossible. If you’d like to learn more about coconut and its myriad health benefits I suggest perusing the many books on the subject. Here’s a link to Amazon’s coconut oil books.

We’d love to know how you use coconut products and what health benefits you have experienced – please tell in the comments below.