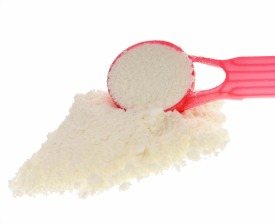 A superfood that may not be familiar to you yet is one that you need to know about. Colostrum is a substance that can prevent infections from bacteria and the flu, relieve symptoms of gastrointestinal disorders, treat diabetes, reduce the inflammation associated with autoimmune disorders, boost the functioning of the immune system, and that’s not all.

Colostrum is packed with a number of important nutrients, including protein, vitamins, minerals, immune factors, growth factors, and metabolic factors. If you haven’t started getting colostrum into your diet, now is the time!

If I was stranded on a desert island and could only choose one food, it would be colostrum without a doubt.

What is this miracle food? Colostrum is the first substance created in the mammary glands of all mammals after giving birth. The newborn ingests this important, milk-like food in the first hours of its life before true milk begins to be produced and ingested.

For many mammals, including humans, biological compounds that are necessary for the health of a newborn are able to pass through the placenta while the baby is still in the womb. In some animals, like cows for example, the placenta does not allow these substances to pass through to the fetus. For these animals, getting the colostrum soon after birth is crucial. It provides all of the compounds needed to survive and thrive.

What is in Colostrum?

Colostrum is similar to milk, but it contains many important biological factors that are either not found in milk or are found in much lesser quantities. As compared to milk it is higher in protein and fat, and lower in lactose. The changing composition of the mother’s colostrum and milk reflects the changing needs of the baby as it ages from newborn to a few hours old to a few days old. These are some of the unique components and properties of colostrum:

What are the Health Benefits of Consuming Colostrum?

High-quality colostrum collected from cows is a powerful superfood. The presence of so many nutrients in colostrum means that it really can help improve your health in a variety of ways. More and more research leads me to believe colostrum is a must for anyone dealing with a digestive disorder that involves healing the gut. As a bonus, there are no risks or side effects of using it and it tastes great!

Colostrum can be viewed as a dietary supplement, but it is really a food. There are no side effects, and the only potential, though small, risk is for people who are lactose intolerant. Even if you do have lactose intolerance, you may be able to take colostrum, as the quantities of lactose are low, considerably lower than in milk. Try some in a small amount if you are lactose intolerant to see if you can digest it without symptoms.

Where Does Colostrum Come From?

Dietary colostrum comes from cows and is sometimes called bovine colostrum. True, high-quality colostrum comes from the milking done within the first six to eight hours after a calf is born. What comes after that is milk. Not all producers of colostrum adhere to that strict rule, so there are products labeled as colostrum that may really be milk.

Unless you have your own cows you probably won’t be able to get fresh, raw colostrum straight from the source. That doesn’t mean you can’t get good quality colostrum. The most common form in which you will find colostrum is powdered or in capsules. Look for product that comes from pasture-fed cows free of pesticides and hormones. Also look for complete colostrum. Some products are marketed as having fat removed for better shelf life. To get the most benefit you want colostrum that has been minimally processed with all those healthy fats intact.

There is one aspect of this processed colostrum that makes it better for you than a fresh raw sample. The latter would come from just one cow, while processed product is a mixture of colostrum from many cows. This gives you a better assortment of all the biological factors from the various individuals. And if you’re worried about the calves, don’t be. They always get the first few hours of colostrum from their mothers.

Using Colostrum in Smoothies and Elixirs

Powdered colostrum is a great ingredient for pretty much any smoothie recipe. It’s particularly awesome in elixirs and lends a rich creaminess that’s to die for. As with any new food or supplement you’re introducing into your diet start small, a teaspoon, and work your way up to as much as two heaping tablespoons. Colostrum will add a creamy taste that works with almost any smoothie flavors. Get creative and try this superfood in all your smoothie and elixir recipes.

At the time of publishing this article I don’t have any smoothie or elixir recipes that call for colostrum. Don’t let that prevent you from trying this truly super food. As I mentioned above, you can add it to any smoothie and experience its myriad health benefits.

Where to Buy Colostrum?

I’ve only found one viable source of this wonderful superfood, Surthrival. Their colostrum is available in several different sizes. The larger size bags are expensive, but they last a long time. Click here to try this amazing food for yourself.

What’s your experience with colostrum? Do you consume it regularly like me, and if so, what health benefits have you noticed? Let me know in the comments below.