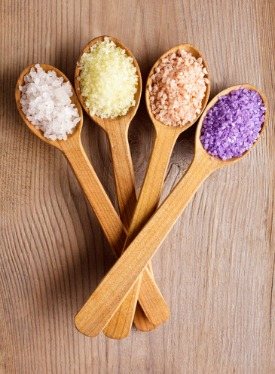 Salt may sound like a strange ingredient for a smoothie, a food that is usually sweet rather than savory. But, there are several good reasons to add a dash of salt to your next concoction, not least of which is flavor. Salt is a flavor-enhancer. A little bit makes any food taste better, even sweet foods.

The next reason is even better. If you choose the right salt you can add a nutritional boost to your smoothie. While typical, refined table salt is detrimental to your health, rock and sea salts can add important nutrients to your diet and actually improve your health.

Salt, as a dietary substance, is a mineral called sodium chloride. It is found in the ground and in the world’s oceans. Despite the dire warnings, we need both sodium and chloride to live and function. Salt taken from natural sources and minimally refined contains other minerals in addition to sodium and chloride.

Most table salt has been refined to eliminate many of those minerals. Most also add in another mineral, iodine. Iodine is an important micronutrient that prevents thyroid enlargement, also known as a goiter. Many people throughout the world are susceptible to an iodine deficiency. The inclusion in table salt is enough to prevent that deficiency.

The Truth about Salt

Health experts and medical professionals have been demonizing salt for decades, largely because too much in the diet is thought to cause high blood pressure. High blood pressure is associated with heart disease, an elevated risk for having a heart attack or stroke, metabolic syndrome, and other health conditions. The assumption has long been that salt raises blood pressure, and therefore puts us at risk for these other diseases and conditions.

It turns out that the research on salt, blood pressure, and related conditions has been sketchy. Furthermore, recent research is turning the idea of salt causing adverse health conditions on its head. One study actually found that people who consumed less salt were more likely, not less, to have heart disease. Another recent report looked at several studies that investigated thousands of patients and found no evidence that cutting back on salt reduces the risk of having a stroke, heart attack, or heart disease in people with normal to low blood pressure.

So why have we been told for so long to avoid salt? The truth may be as simple as years of misguided research and assumptions. Early research that may have been faulty connected the dots between salt and heart disease and the idea stuck.

Not only is the assumption wrong, but it could be harmful. A handful of studies indicate that eating too little salt could be bad for you. One study dating back to the 1970s proved that eating too little salt causes the kidneys to excrete a substance called renin. This leads to a series of events in the body ending in an increased risk of heart disease. More recent research from Italy has shown that in patients with heart disease, eating less salt actually increased the risk of death.

It seems that we not only need some salt in our diets, we may need more than what doctors have long been suggesting as a dietary limit. Your choice of salt is important, though. Most of us eat a highly processed version of salt. Table salt, also called refined salt, comes from mineral deposits. After it is mined from the ground it is processed to remove minerals other than sodium chloride, and to give the product a finer texture. Temperatures of up to 1200 degrees are used as part of the refining process. This high heat changes the chemical structure of sodium chloride, transforming it into a state that is no longer natural and different from what our bodies are designed to digest and use.

Iodine is then often added in. This is called iodized salt. Processors may also include other additives. U.S. law allows for up to two percent of table salt to be additives. In addition to iodine, a common additive is an anti-caking compound. This helps to avoid the clumps that salt gets from absorbing moisture. Salt with this additive is usually labeled as free-flowing salt. Anti-caking compounds used in refined salt include calcium carbonate, magnesium carbonate, and aluminum hydroxide. Aluminum can be toxic and may even be a contributor to the development of Alzheimer’s disease.

Perhaps the worst thing about refined salt is simply that it has been stripped of beneficial minerals. Around 80 minerals and essential trace elements are removed. There are many other options for salt that are minimally refined or not refined at all. These contain many nutrients that your body needs, including trace minerals that are not always easy to get from a normal diet.

One of the most exciting salt products on the market is a pink crystal salt found in the Himalayan Mountain range. This beautiful pink salt is mined in Pakistan and for a long time was not easy to get in the U.S. Although it is mined like refined table salt, Himalayan salt is only minimally processed and retains the minerals that came out of the ground with it.

It is still mostly sodium chloride (around 95 percent), but Himalayan salt also contains 84 different minerals including iron oxide, the mineral that gives it a pinkish hue. This mixture of so many elements benefits your health in a number of ways:

Sea salt is another alternative to table salt, but be aware that not all sea salts are the same. The label of sea salt simply means that a salt came from the ocean. It does not necessarily mean unrefined or natural. Many sea salt products have been highly processed and are no different from any other table salt. An exception to this is Celtic sea salt.

Celtic sea salt is harvested from the Atlantic coast of Brittany, France. It is harvested and air-dried on clay, then raked and gathered using wooden tools. That is the extent of the processing and as a result this salt contains over 80 trace minerals in addition to sodium chloride. Celtic sea salt retains some moisture and is not free-flowing. It has a grayish color.

Like Pink Himalayan salt, Celtic sea salt has many health benefits thanks to the minerals and the lack of a refining process. This salt can regulate your blood pressure, ease congestion, regulate sleep patterns, prevent kidney stones, aid the immune system, control body pH, and prevent muscle cramps.

A third, healthful alternative to table salt is Redmond salt. This salt comes from a natural deposit in Redmond, Utah. The deposit formed millions of years ago when what is now Utah was a shallow, salt water sea. The area was also volcanic. The combination of minerals from volcanic ash and the ancient sea has created a salt deposit that is rich in many trace minerals and nutrients. Redmond salt is sold by the Real Salt Company, which mines this precious mineral from the deposit. Like Celtic sea salt and Himalayan salt, this product is all natural, unprocessed, and full of beneficial nutrients.

There are many other high quality or “real” salts available. The there highlighted above are very accessible in the United States. For people living in other areas of the world, there’s likely a more local or traditional unrefined salt to incorporate into your smoothies and other dishes.

Salt in Your Smoothie

Chefs and many amateur cooks have long known that salt plays a role in all dishes, savory and sweet. It enhances the flavors of all foods by suppressing bitterness, increasing moisture, and balancing sweet and sour. The secret to correctly salting your foods is to get the amount just right. This takes practice. An over-salted smoothie will taste bad, while an under-salted smoothie won’t taste as great as it could. Try a pinch in any of your smoothie recipes and do a comparison taste test. You should find that the same smoothie with this extra ingredient tastes more delicious and more complex. Of course, it will also include more healthful and beneficial nutrients.

When to Use Caution

The evidence regarding the health benefits and the risks of consuming salt is conflicting. While more proof continues to demonstrate that unprocessed, mineral-rich salts may actually be good for us, there are reasons to use caution. If you already have high blood pressure, you should restrict your salt intake. Some people are genetically inclined to have higher blood pressure, and consuming too much salt can cause damage. You may also need to exercise caution if you are prone to forming kidney stones. If you are unsure about whether you should be restricting salt in your diet, speak to your doctor.

What’s your favorite kind of salt? Do you add a dash to all of your smoothies? Leave a comment below and let me know.